Home / Sweet Ballz Bake up Sweet Deals on the Premiere of Shark Tank! 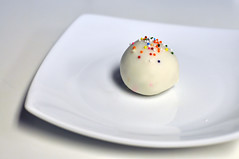 SHARK TANK premiered its 5th season on Friday with some new statistics. They have made over 23 million in deals and created over 9,000 jobs. On the premiere, James McDonald and Cole Egger of Sweet Ballz walked in front of the SHARKS asking for $250,000 for a 10% stake in the company.

Sweet Ballz is cake shaped in the form of balls and sold in 4 packs. The cake balls are basically only sold in one store but that store is 7-11 which has created $700,000 in sales in just 90 days. Those numbers caused all the SHARKS to sit back in awe.

Now the frenzy has started. All 5 SHARKS put deals on the table ranging from a 25% stake in the company to 40% stake.  Barbara and Marc joined forces and made an offer which caused Robert to join forces with Lori and Mr. Wonderful at $250,000 for 30% equity.

In the end, the guys made a shocking move by picking the two SHARK team over the three SHARK team going against Lori and her QVC connection. It is highly unusual to have all the SHARKS make deals let alone have 3 SHARKS join forces. We are sure that James and Cole will be wildly successful after their appearance on SHARK TANK. If you or anyone you know has an invention idea and needs help, please contact us at New Product Consulting.

Inventor on Shark Tank creates a feeding frenzy amongst the five Sharks!